A confluence of positive factors propelled the investment grade (IG) credit market during the first half of 2019. Declining treasury yields, combined with a 38 basis point (bp) tightening of spreads, resulted in a total return of 9.85% for the Bloomberg Barclays U.S. Corporate Index, its best H1 (first half) performance since 1995. The index also delivered an excess return (the portion of the return due to changes in spread rather than interest rates) of 3.91%, which was its best since 2009. 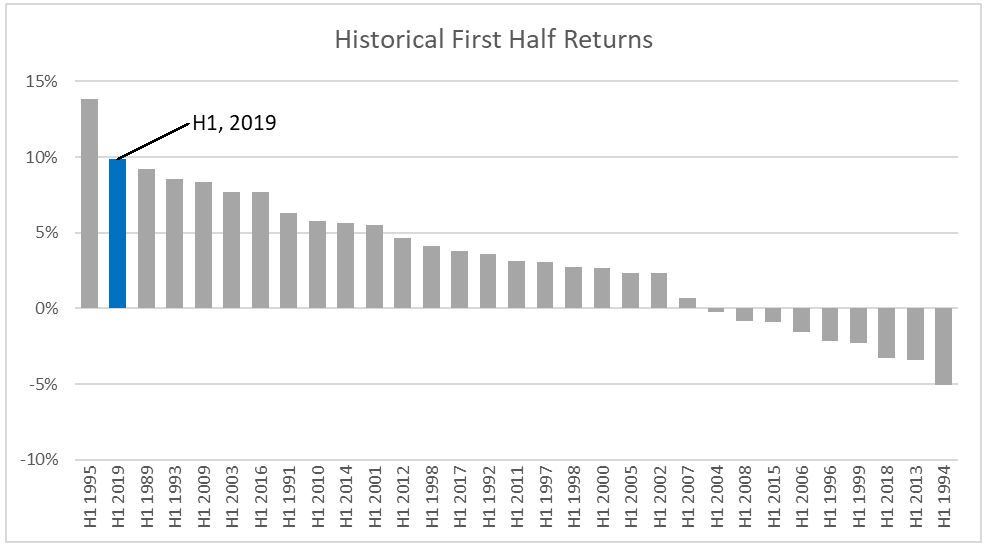 The BBB segment of the investment grade market performed particularly well, which aligned with our expectations, as we felt the sector had been unnecessarily oversold at the end of last year. BBBs delivered the strongest results among all IG rating categories, posting a total return of 10.87% and an excess return of 4.85%. In fact, they even outperformed the Bloomberg Barclays U.S. Corporate High Yield Index (9.94%), which was the first time in five years. 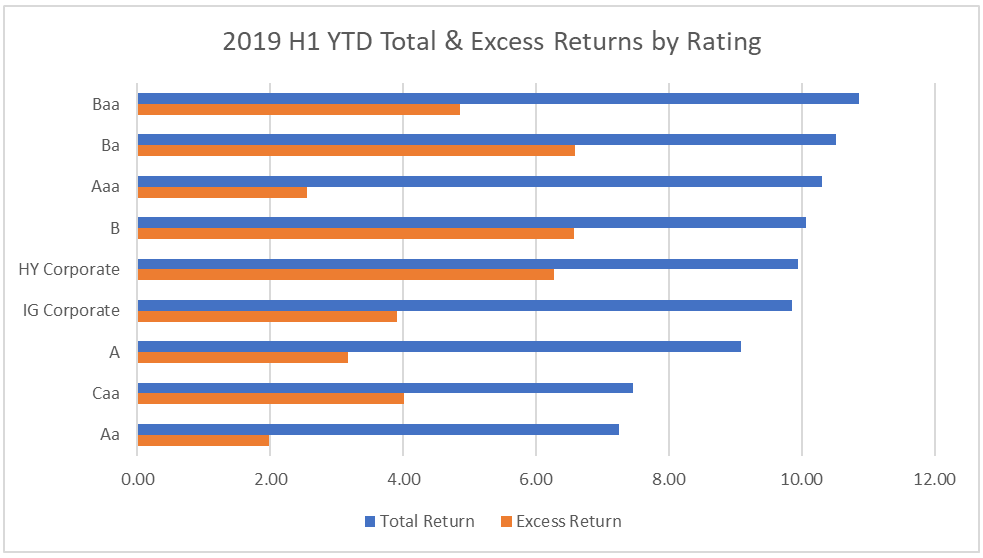 Support from the Fed

The Federal Reserve’s pivot at the end of 2018 from a restrictive policy to an accommodative policy triggered rallies in virtually every financial asset, including investment grade credit. Since the beginning of the year, yields in the Bloomberg Barclays U.S. Corporate Index have plummeted 1.04%. 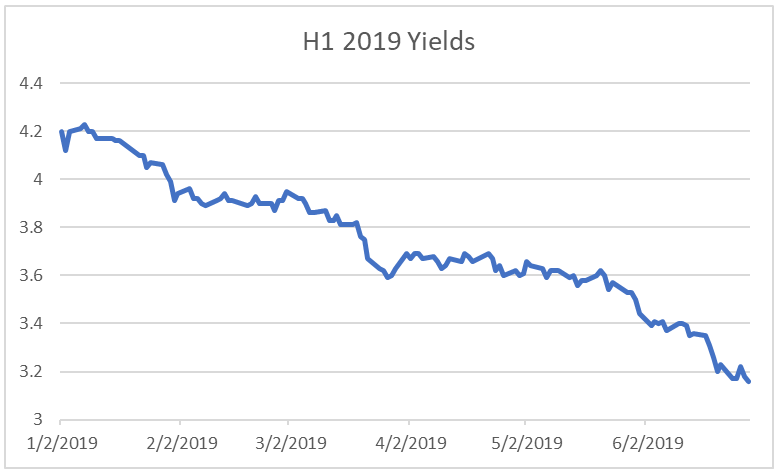 The IG market has benefitted not only from a sustained rally in Treasuries, which was primarily due to market expectations around Fed rate cuts, but also from concurrent spread tightening, which reflects an improvement in the market’s outlook about credit risk.

In addition, during the first half of 2019 the IG market benefitted from a rebound in global demand and a simultaneous decrease in supply, further driving up prices.

Despite the precipitous decline in U.S. IG yields, they are still substantially higher than most international yields, a powerful incentive for foreign investors.

Even with the added expense of currency hedging, IG fixed income returns are better in the U.S. than in Europe. Moreover, as you can see from the chart below, hedging costs have been decreasing recently, which contributed to the inflows. 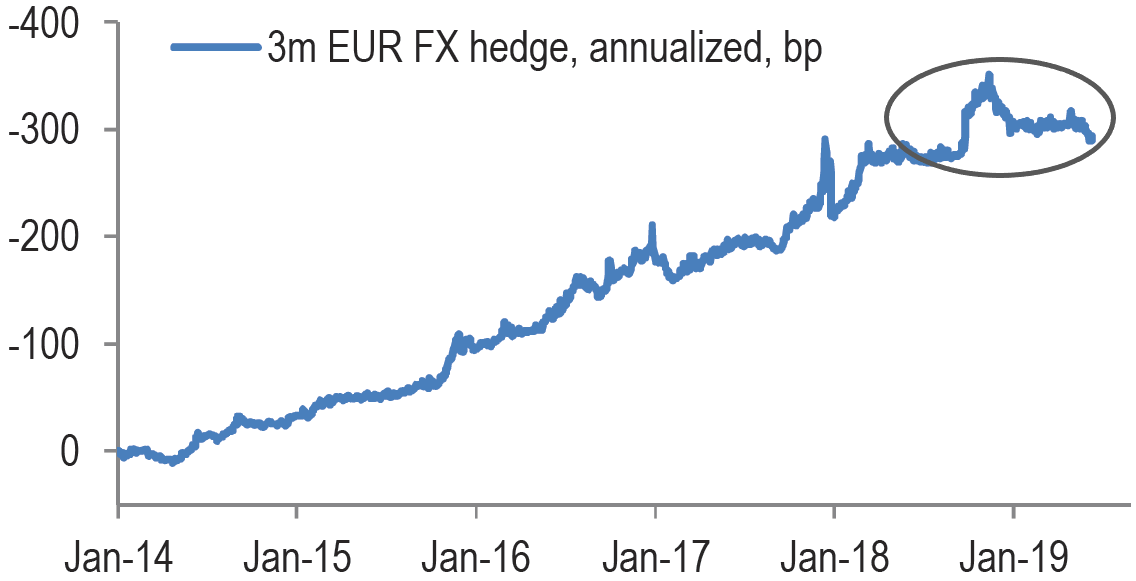 At the same time, supply from U.S. IG issuers fell substantially during the first half, also reversing a significant market trend. As the chart below shows, year-over-year gross supply (the total amount of new issuance) is down 7%, and more importantly year-over-year net supply (the amount of new issuance less the amount of maturing debt) is down 20%. We’ll keep a close eye on issuance for the remainder of 2019, as reduced levels generally indicate that corporations are trying to keep their debt levels in check. 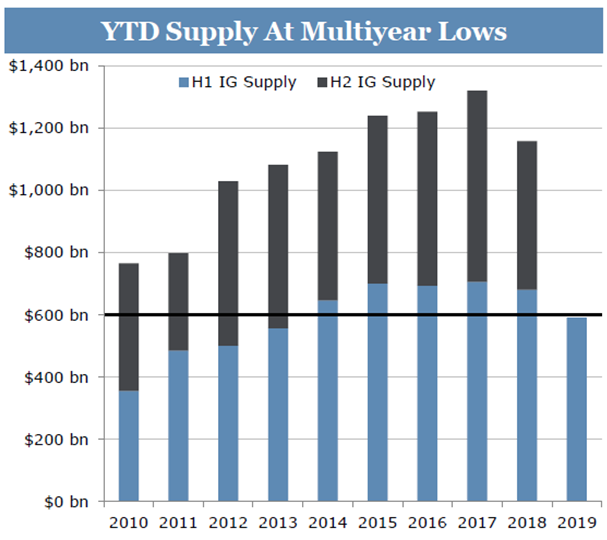 Despite all the positive performance, we have not seen investment grade credit fundamentals improve meaningfully in 2019. According to Morgan Stanley1, during the first quarter median leverage ratios across the IG market, ticked higher to 2.34x, as last twelve-month EBITDA rose only 1.4% while debt grew 2.8%. Similarly, interest coverage ratios declined to 10.26x as interest expense increased 3.1%. Additionally, free cash flow continues to be diverted towards share buybacks, dividends and mergers & acquisitions. However, the BBB space is the silver lining to this story as nearly half of the 25 largest BBB issuers have reduced their debt levels this year. We believe this is a significant contributor to the strong BBB performance in 2019.

For the balance of 2019, we think risk markets will largely take their direction from the Fed and central banks across the globe. That said, we feel that most of the return resulting from spread tightening for 2019 has largely been realized. We believe the performance of IG credit for the second half of the year is unlikely to match 1H19 and expect it will rely upon carry and interest for the bulk of its return. Within the credit spectrum, we still favor firms that are committed to reducing debt and leverage. We will remain vigilant and monitor any signs of animal spirits knocking our companies off this path.

Opinions expressed are those of the author, are subject to change at any time, are not guaranteed and should not be considered investment advice. Past performance does not guarantee future results.

The Bloomberg Barclays U.S. Corporate Index includes publicly issued U.S. corporate and specified foreign debentures and secured notes that meet the specified maturity, liquidity, and quality requirements. To qualify, bonds must be SEC-registered. The index includes exclusively corporate sectors, including Industrial, Utility, and Finance, which include both U.S. and non-U.S. corporations.

The Bloomberg Barclays US Corporate High Yield Bond Index measures the USD-denominated, high yield, fixed-rate corporate bond market. Securities are classified as high yield if the middle rating of Moody’s, Fitch and S&P is Ba1/BB+/BB+ or below. Bonds from issuers with an emerging markets country of risk, based on Barclays EM country definition, are excluded.

EBITDA is an acronym for Earnings Before Interest, Taxes, Depreciation and Amortization.

Free cash flow represents the cash that a company is able to generate after laying out the money required to maintain and expand the company’s asset base. Free cash flow is important because it allows a company to pursue opportunities that enhance shareholder value.

Leverage ratio is a financial measurement that looks at how much capital comes in the form of debt (loans), or assesses the ability of a company to meet its financial obligations.

Interest coverage ratio is a measure of a company’s ability to service its debt and meet its financial obligations. The higher the coverage ratio, the easier it should be to make interest payments on its debt or pay dividends. The trend of coverage ratios over time is also studied by analysts and investors to ascertain the change in a company’s financial position.

Osterweis Capital Management is the adviser to the Osterweis Funds, which are distributed by Quasar Distributors, LLC. [40948]