Skip to Content
Home / Insights / The Plumbing Clogged, but Do Not Throw Out the Baby With the Bath Water

According to John Sheehan, the recent selloff in Investment Grade fixed income was exacerbated by technical factors. In his view, regulatory changes implemented after the 2008 crisis removed a critical shock absorbing mechanism that caused spreads to spike.

The week ending March 20 saw the largest selloff in Investment Grade (IG) credit since the 2008 financial crisis. Investors rightfully became nervous about IG bonds as shutdowns for COVID-19 rolled through the economy and the price of oil collapsed following a breakdown in talks between Russia and Saudi Arabia. While there have been some outlandish predictions, even the most even keeled analysis expects to see a sharp increase in unemployment and a very high likelihood of a recession. This will certainly strain the balance sheets of all companies and result in an uptick in credit risk.

Not surprisingly, these concerns translated into a record volume of IG mutual fund outflows – approximately $35 billion for the week, which was roughly five times greater than the next largest outflow ever ($7.3 billion, during the previous week).

What is not widely appreciated about the selloff is that the accompanying spike in spreads was due not only to concerns about credit risk, but also to structural reductions in market liquidity. Following the financial crisis in 2008, legislation was passed that substantially disincentivized banks from purchasing bonds for their own balance sheets, as regulators worried the assets could compromise the health of the banks should they deteriorate. At the same time, the corporate credit market saw explosive growth and the amount of bonds outstanding nearly tripled. The concurrent contraction of dealer balance sheets combined with the massive growth of corporate issuance has seen the ratio of bonds outstanding versus dealer ownership balloon from 9x in 2Q 2007 to an astonishing 140x at the end of 2019. 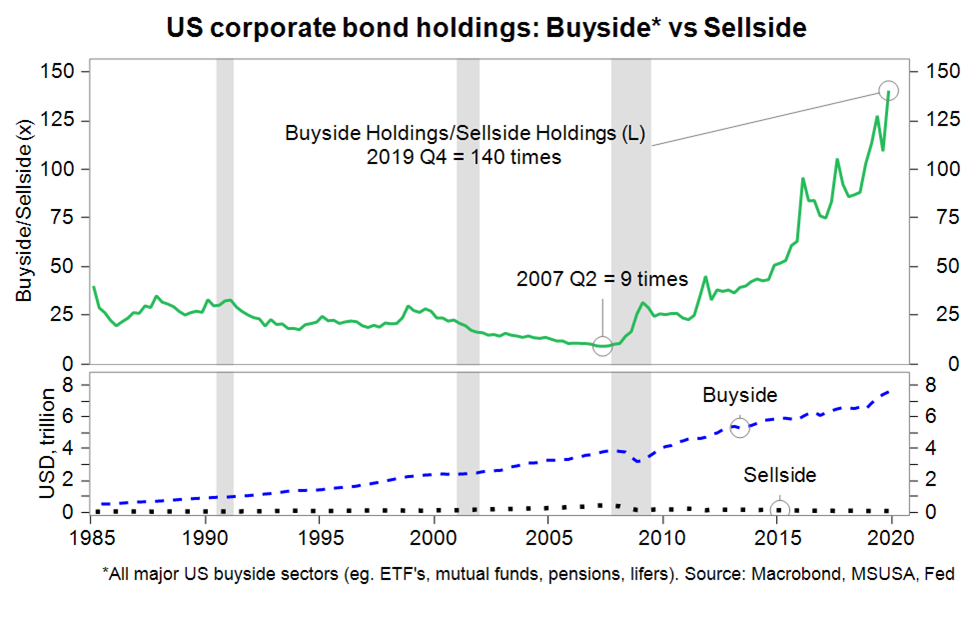 One of the unintended consequences of the post-2008 banking regulation is that it removed an essential and long-standing shock absorbing mechanism from the marketplace. In particular, sell side institutions are now substantially less willing and/or able to warehouse bonds to meet the liquidity needs of mutual funds during times of significant outflows. This creates a negative feedback loop where asset managers see the cracks in the system and start to sell in anticipation, causing fund values to fall, which encourages more outflows, and so on. Eventually, the imbalance gets so great that spreads begin to widen indiscriminately, reflecting the lack of liquidity rather than the intrinsic credit risk of the bonds being traded. When fund managers become forced sellers in a market where the only buyers are other fund managers – who have limited liquidity themselves – prices can fall rapidly. The market ultimately needs a buyer of last resort to step in and perform the function previously executed by dealers.

On March 23, the Fed restored order to the credit markets by rolling out three programs: the Commercial Paper Funding Facility (CPFF), the Primary Market Corporate Credit Facility (PMCCF), and the Secondary Market Corporate Credit Facility (SMCCF), all which allow the central bank to step in an provide liquidity. Following this announcement, spreads began the long process of normalization.

Some Credits Will Go Down the Drain

Even with the Fed’s backstop, we will no doubt see a surge in downgrades to high yield. In fact, two high profile IG issuers have already lost their investment grade rating and we anticipate seeing more in the sectors most impacted by COVID-19 and the Saudi/Russian oil price war. Additionally, while extremely rare and still unlikely, we are not ruling out the possibility of IG credits restructuring, impairing par claims, or defaulting. Nonetheless, we stand by our view that the downgrades will be idiosyncratic rather than systematic.

Do Not Throw Out the Baby With the Bathwater

Despite the risks, we believe IG is more attractive now than it was before the selloff. The scale of the COVID-19 situation has cast a cloud of uncertainty over the markets, and AA and A spreads are now both wide to BBB spreads just a month ago. In fact, as of March 20, A spreads were wider than BBB spreads have been for the past ten years, and AA spreads were generally wider than BBB spreads since 2016. In addition, AA spreads were similar to average BBB spreads over the past ten years (190 bps vs. 189 bps). We feel this dislocation has created an excellent opportunity to buy high quality credits with strong balance sheets at the cheapest valuations in over a decade. 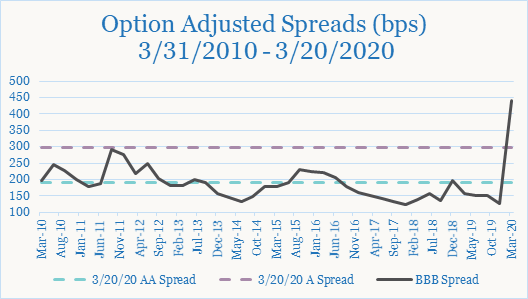 To be sure, the recent selloff has exposed the credits that were not well-positioned to withstand the economic dislocation from the cornonavirus. We continue to be vigilant in avoiding those securities, but we are positioning in our fund to take advantage of the opportunities created by the breakdown of the investment grade market structure.

Spread is the difference in yield between a risk-free asset such as a U.S. Treasury bond and another security with the same maturity but of lesser quality. Option-Adjusted Spread is a spread calculation for securities with embedded options and takes into account that expected cash flows will fluctuate as interest rates change.

Osterweis Capital Management is the adviser to the Osterweis Funds, which are distributed by Quasar Distributors, LLC. [44541]