Skip to Content
Home / Insights / Not as BBBad as You’ve Heard – Despite Negative Headlines, We Do Not Anticipate a Wave of Downgrades

BBB issuers have received a lot of bad press recently, but John Sheehan believes the perception is worse than the reality and that credit selection is key to finding good risk adjusted returns. 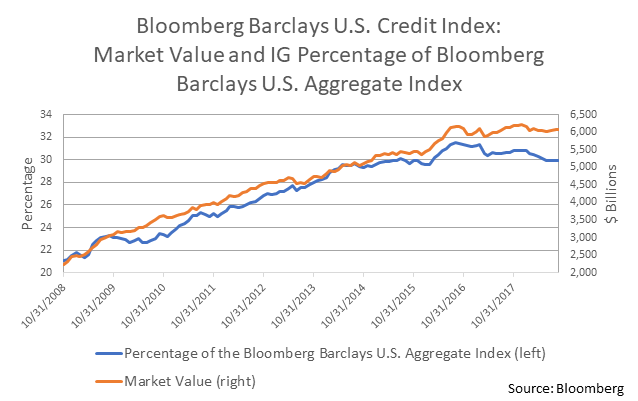 Since the crisis we have also seen a growth of BBB rated debt as a percentage of the investment grade universe. Recently, concerns over the size of BBB debt have garnered substantial attention. High-profile downgrades including General Electric, Anheuser-Busch InBev, and PG&E Corporation (and their subsequent bankruptcy filing), combined with a bearish fourth quarter on Wall Street, have sparked concerns that the BBB market may pose systemic risks to the U.S. credit market, a narrative that has been repeated frequently in the financial press.

Our view of the BBB market is more constructive than the prevailing outlook in the market. We feel that a rash of downgrades to BB is unlikely and that there are BBB bonds that offer attractive risk adjusted return potential.

To appreciate our perspective, it is helpful to understand the dynamics that have driven the expansion of the BBB market. As the chart below shows, the most significant source of growth has come from new issuance ($1.2 trillion) followed by downgrades ($745 billion). These two sources are closely related, as we have seen several large deals that have resulted in companies being downgraded to BBB prior to issuing new debt. In most of these cases, the borrowers increased leverage to finance mergers and acquisitions (M&A). It is also important to note that $387 billion of bonds were upgraded out of BBB into A, which exceeds the volume of BBBs downgraded below investment grade. 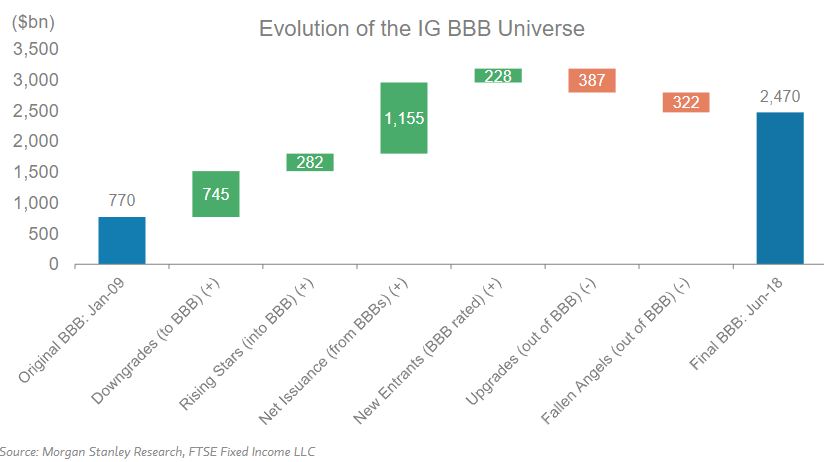 Given the historically cheap borrowing rates during the past decade, it is our view that many issuers who fell to BBB have done so willingly, if not deliberately. IG corporations with healthy financials saw the low costs of funds as an opportunity to boost their equity returns by pursuing a combination of M&A activities, share buybacks and dividends.

The Bloomberg Barclays U.S. Corporate Index yield-to-worst fell from 9.09% during the financial crisis to a record low of 2.60% in April of 2013. Likewise, the Bloomberg Barclays Baa Corporate index (Baa index) fell from its crisis peak of 10.22% to a low of 3.08%, also in April of 2013. With an after-tax cost hovering near 2%, the decision to borrow was straightforward for many CFOs. 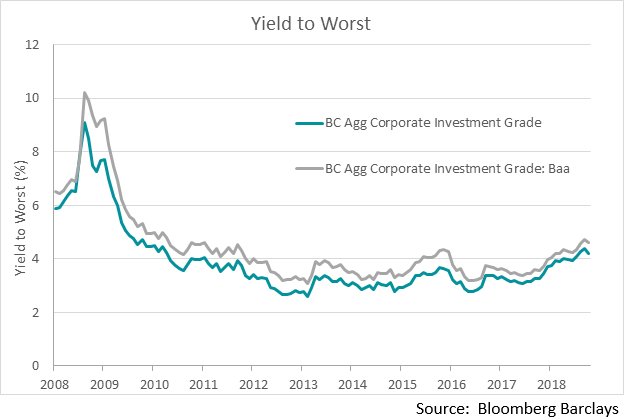 Perhaps more importantly, the strong demand for investment grade debt resulted in a dramatic flattening of credit spreads across the ratings spectrum. During the past ten years, the average incremental cost of triple B debt versus single A debt was just 66 basis points (bps).

To put that in perspective, the incremental cost of going from BBB to BB (i.e., from investment grade to high yield) was a far more punitive 180 bps. Importantly, this is one of the reasons we believe BBB borrowers will do everything within their power to preserve their current rating. The price of another downgrade would be too steep.

Given the flat curve, many issuers made the conscious choice to increase their leverage and slip to BBB rather than to limit their borrowing and preserve their higher rating.

Of course, not all firms that have been downgraded to BBB in the past decade have done so voluntarily. Most notably, in the aftermath of the financial crisis the rating agencies downgraded much of the global banking sector, and in our opinion, they have been slow to acknowledge the substantial improvement to bank balance sheets. This is important, as financial institutions comprise 20% of the Baa index.

Large global banks are now required to hold significantly higher levels of the highest quality capital (core equity tier 1, CET1) than they were before the crisis. Global systematically important banks (GSIBs) improved their CET1 ratio to 12.5% by the end of 2017 compared to an estimated 3.7% in 2007. Similarly, GSIBs are now in a materially better liquidity position as measured by Basel III’s Liquidity Coverage Ratio (LCR).

We are starting to see the rating agencies change their perception, as evidenced by the Moody’s upgrade of Bank of America to A3 in December of 2017. They followed suit in November of this year by putting Citigroup, the second largest issuer in the index, on positive watch. We expect a company like Citigroup to benefit from being a new name in the single A arena.

Another underappreciated, positive dimension of the BBB market is that most issuers have substantially more financial flexibility than BBB companies have had historically. The largest 15 non-financial issuers of BBB bonds generate an average free cash flow in excess of 2x their average annual interest expense. BBB issuers have also taken advantage of low interest rates by pushing their maturity profile further out the curve. In fact, the largest BBB issuers have just $56 billion of maturities in 2019, which is very manageable given that they will generate total free cash flow of $91.3 billion.

Additionally, the largest 15 issuers pay out $79.8 billion to shareholders in buybacks and dividends compared to an average annual interest expense of $42.5 billion. We acknowledge that suspending dividends and buybacks is a painful decision for management. However, the ability to fund both interest and principal from free cash flow is a powerful tool to protect ratings. In fact, two of the three largest issuers in the Baa index, GE and ABI, both cut dividends in 2018 to maintain their investment grade status. 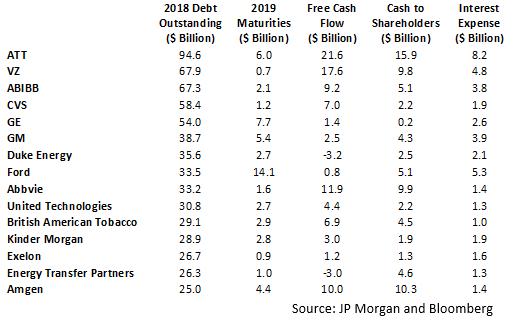 Not a Ticking Time BBBomb

In summary, we do not think that there will be a large-scale downgrade of BBB bonds to high yield (HY). In fact, 2017 saw the lowest rate of BBB- bonds downgraded to HY in 30 years.

Moreover, we feel that it is misguided to focus on BBB risk in aggregate. To properly assess the risk, it is necessary to focus on individual companies that are rated BBB. The BBB market is a diverse group that spans virtually the entire economy, creating a range of opportunities for investors. There is no company named “BBB.”

We especially like BBB bonds in sectors that are improving/deleveraging, and financials with their positive ratings momentum. We are actively investing in credits with significant amounts of financial flexibility and management teams that have displayed a commitment to their bond holders.

Lastly, we feel BBB valuations are attractive. According to Morgan Stanley, at the end of November, there were $188 billion of 5-10 year BBB bonds trading wide of the BB+ index. So, the market is already pricing in a substantial level of downgrades. Given all these factors, we feel the BBB market still has plenty of excellent opportunities, and we intend to continue investing in the space.

The Fund’s holdings may be viewed by clicking here.

The Bloomberg Barclays U.S. Aggregate Bond Index is an unmanaged index which is widely regarded as the standard for measuring U.S. investment grade bond market performance.

The Bloomberg Barclays U.S. Corporate Index includes publicly issued U.S. corporate and specified foreign debentures and secured notes that meet the specified maturity, liquidity, and quality requirements. To qualify, bonds must be SEC-registered. The index includes exclusively corporate sectors, including Industrial, Utility, and Finance, which include both U.S. and non-U.S. corporations.

The Bloomberg Barclays U.S. Baa Corporate Bond Index includes only the Baa-rated subset of the Bloomberg Barclays U.S. Corporate Index. The index includes publicly issued U.S. corporate and specified foreign debentures and secured notes that meet the specified maturity, liquidity, and quality requirements. To qualify, bonds must be SEC-registered. The index includes exclusively corporate sectors, including Industrial, Utility, and Finance, which include both U.S. and non-U.S. corporations.

The yield to worst (YTW) is the lowest potential yield that can be received on a bond, assuming there is no default.

Quantitative easing is a monetary policy in which a central bank purchases government securities or other securities from the market in order to lower interest rates and increase the money supply.

Osterweis Capital Management is the adviser to the Osterweis Funds, which are distributed by Quasar Distributors, LLC. [37110]