Skip to Content
Home / Insights / A Contrarian View: Now Is Still the Time to Invest in Growth

In early November 2018 we published a blog post claiming that the time was right to invest in growth. In this piece, we revisit our analysis and draw the same conclusion.

Our original article was based on research from Cornerstone Macro, who released a report arguing that the early stage of a cooling economy is an excellent environment for growth stocks. It was a contrarian position, as the traditional response to an economic slowdown is to rotate out of growth stocks and into value-oriented companies. We summarized the argument this way:

A slowdown favors growth firms because it is a more challenging environment in which to operate, significantly reducing the number of companies that are able to deliver steadily increasing earnings.

It turned out that the emerging concerns about the economy in October rapidly escalated into fears of a full-blown recession in late November and December, triggering a fourth quarter selloff that left every major equity index negative for the year.

Those fears subsided in January, and the first quarter of 2019 has been a return to normalcy. Equity indices have mostly recovered and markets are back in equilibrium, so we felt it was a good time to revisit our previous analysis.

Our conclusion remains unchanged. Based on both recent macroeconomic data and market returns, we continue to feel that now is a good time to invest in growth stocks. More generally, we believe that secular growth trumps cyclical growth, particularly during a downturn.

Cornerstone uses the Institute for Supply Chain Management’s Purchasing Manager’s Index (ISM PMI) as its leading indicator to measure economic activity. As the chart below shows, PMI has been falling steadily since peaking in late 2018.

More importantly, signs of a cooling economy prompted the Federal Reserve (the Fed) to pause its interest rate hiking program at its March meeting. Following the decision, the Fed released a statement saying “the growth of economic activity has slowed from its solid rate in the fourth quarter…. Recent indicators point to slower growth of household spending and business fixed investment in the first quarter.”

As we discussed in our last post, according to Cornerstone, “History shows that the sweet-spot for growth, cyclically speaking, is the period that follows a peak in economic prospects.” The chart below shows how they model the phases of a risk-off cycle. The x-axis indicates the number of months each phase is away from the peak (e.g., the initial slowdown starts directly after the peak and ends five months later). 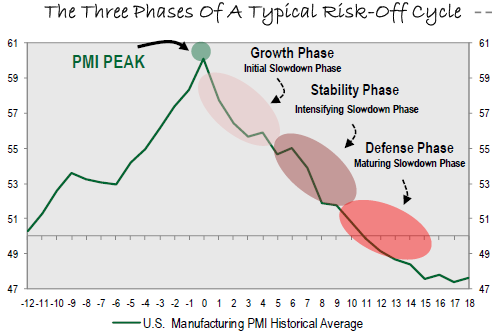 While we fully agree with Cornerstone’s premise, we think the lifespan of the phases in their model may be too short given the current economic conditions. Evidence of a slowdown is mounting, but the deceleration appears to be measured. Assuming the current trajectory continues, we think the transition to the defensive phase could take materially longer than Cornerstone’s model suggests.

Cornerstone has assembled a series of single-variable analyses that track the returns for stocks in the S&P 500, and the growth-oriented companies have all been performing quite well. For example, in the chart below you can see that the firms in the S&P 500 with high earnings growth (i.e., the most basic definition of a growth stock) have steadily outperformed those with lower earnings growth since last November (which coincides with the peak in PMI).

Likewise, stocks in the S&P 500 with higher growth estimates have also outperformed over that same period. 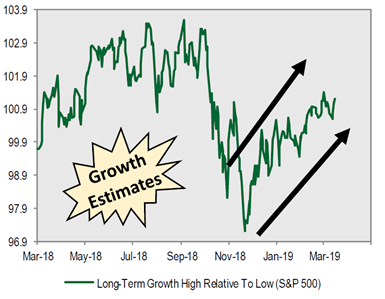 As have firms with higher operating margins.

In each case, the pattern supports the argument that growth stocks do well in the early stages of a slowdown, which is historically when secular growth has outperformed cyclical growth.

We will monitor these trends to see how they evolve, but for the time being we continue to believe that the near-to-medium term should be a good time to buy growth stocks.

The ISM Manufacturing Index monitors employment, production, inventories, new orders and supplier deliveries. The Index is based on surveys of more than 300 manufacturing firms by the Institute for Supply Management (ISM).

The S&P 500 Index is an unmanaged index that is widely regarded as the standard for measuring large-cap U.S. stock market performance. The index does not incur expenses, is not available for investment, and includes the reinvestment of dividends.

Earnings growth is the annual rate of growth of earnings from investments.

Osterweis Capital Management is the adviser to the Osterweis Funds, which are distributed by Quasar Distributors, LLC. [38776]