Skip to Content
Home / Insights / A New Paradigm for Stocks: Digital vs. Decline, Not Growth vs. Value

As the influence of technology continues to increase, we believe investors need to reconsider the relevance of both the traditional style matrix and sector classifications.

Although traditional investing philosophies have long relied on the distinction between “growth vs. value,” we believe both categories are becoming irrelevant. As the economy becomes more digitized and businesses are disrupted at an increasing rate, a low multiple on current earnings (i.e., a classical view of “value”) is not a bargain if the business is structurally disadvantaged going forward.

Rather than looking at the world through this traditional lens, we think a more constructive framework is “digital vs. decline." In our view, digital businesses have substantial structural advantages, making them far more likely to prosper and generate long-term cash flows than incumbents who fail to adapt. Moreover, we feel that sector classification is now materially less important than the strength of a company’s business model.

Techceleration Is the New Normal

Technology has always progressed exponentially (as per Moore’s Law, processing power doubles every 18 months), but the pace of innovation has increased recently as the digital landscape has evolved. With the proliferation of devices (PC, smartphone, IoT, cloud, etc.) technologies are increasingly able to leverage one another to accomplish tasks that previously would have been impossible, creating a virtuous circle. Machine learning algorithms, for example, require large data sets that are sourced from online applications and are generally analyzed using cloud-based technology. This is just one of many examples where each individual component enables the other to achieve its full potential – a technological symbiosis that benefits the entire ecosystem.

A recent research report from Bank of America Merrill Lynch1 argues that the next five years will see the fastest rate of technological change ever, citing the following factors:

Not surprisingly, the report also predicts that the forthcoming digital transformation will affect a wide range of industries, providing a strong tailwind to a few obvious sectors (e.g., technology hardware and software) and equally strong headwinds to others (e.g., old media companies and traditional healthcare providers).

One of the natural byproducts of increased innovation has been higher rates of technology adoption. New technologies are accepted by the public faster than ever before. For example, it took 80 years for telephones to reach half of U.S. households, but it took less than 10 years for cell phones to achieve that mark.

The chart below (from the same BofA report) provides a broader perspective on adoption rates. The trend is unmistakable – if a new technology is popular, it can spread exceptionally quickly. For example, while it took airlines 64 years to reach 50 million users, Facebook reached this mark in just 4 years. 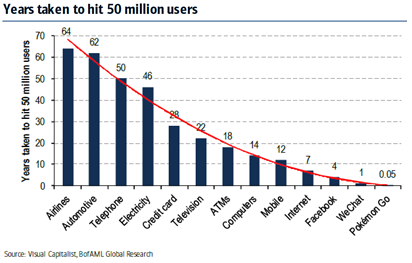 More recently, ride sharing companies like Uber and Lyft achieved mass scale in just a few years. And according to a recent report by JMP Securities, shared scooters and dockless bikes offered by private companies Lime and Bird achieved adoption of 10 million cumulative rides in just over a year, an even faster rate.

The economic data strongly validates the innovation and adoption trends. Perhaps most strikingly, based on 2018 data from the U.S. Bureau of Economic Analysis, software revenues steadily increased as a percentage of domestic GDP from 2002 – 2017, and Bank of America Merrill Lynch expects this to continue.2 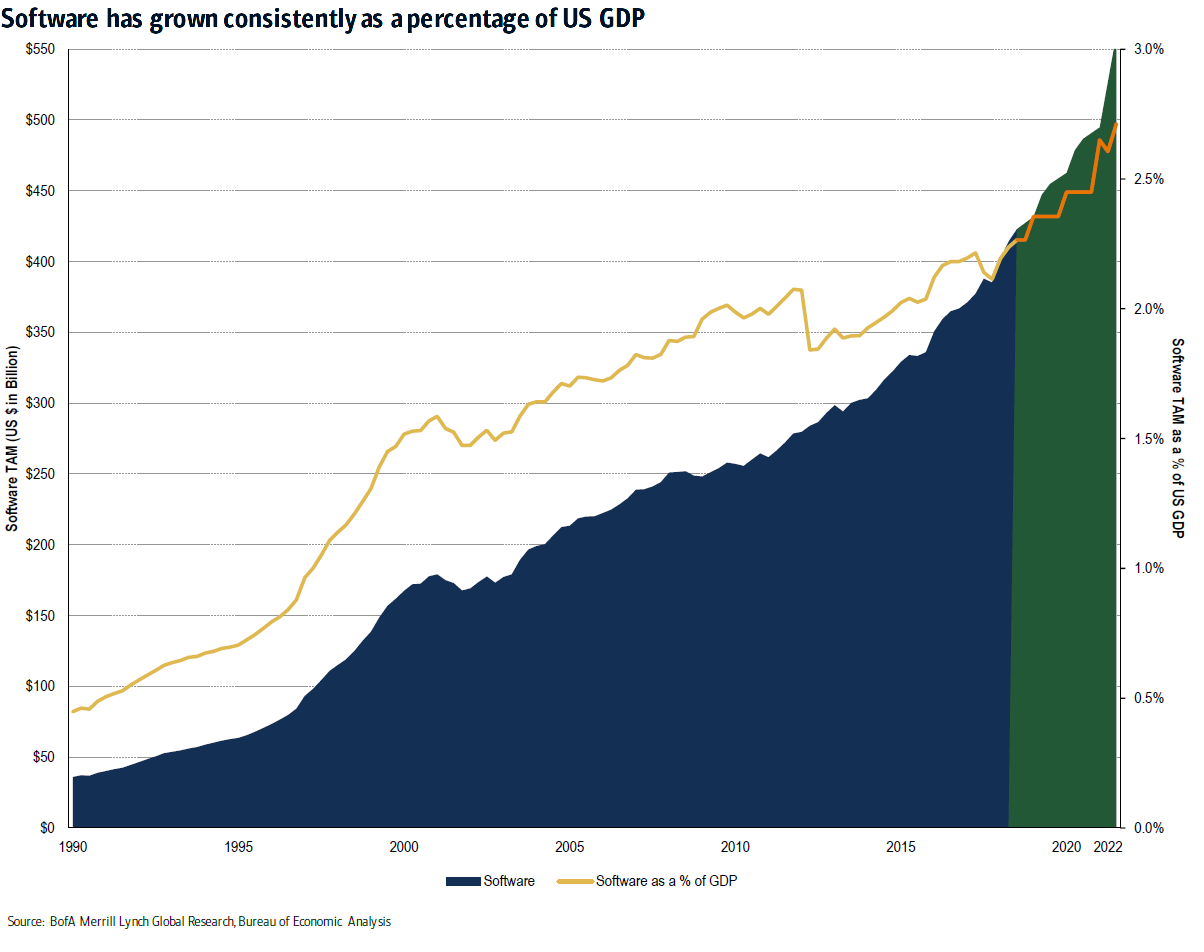 While the trajectory is impressive, with software at less than 3% of GDP, we are still in the very early days of the structural shift towards greater software penetration. Across industries, companies are increasingly deploying new applications to maintain market share and grow their competitive advantage. Even traditional sectors, like industrials, are beginning to take technology more seriously. In a recent report, Deutche Bank estimated that industrial firms are poised to invest $500B in new technology over the next 5-7 years. It’s no surprise that the U.S. Bureau of Labor Statistics predicts the number of software developers in the world is going to be growing 24% annually through 2026.3

As Microsoft CEO Satya Nadella said recently, “every company is becoming a digital company.” Indeed, disruptive technological innovation can occur within any sector of the economy. Amazon began as a book seller, shaking up an industry that hadn’t seen any major advancements since the Dewey Decimal System in 1876. The company has continued to innovate, disrupting the broader retail, grocery, logistics, media, advertising, and information technology landscape.

In our view, the strength of a company’s business model is much more important than its sector. Although many of our core positions are technology-related, we also own several non-IT companies that are directly benefiting from the shift to digital. Below are three firms in our portfolio that we believe have excellent upside potential and that demonstrate the breath of disruptive possibilities in the digital economy:

The market intelligence firm IDC predicts that by 2021 at least 50% of global GDP will be digitized. In our view, it’s still very early in the technology cycle and we believe that only companies that adapt will be able to thrive in the future. As such, we think investors would be well-served to reconsider the traditional style distinction between growth and value, and instead determine whether each company in their portfolio is digitally savvy enough to prosper and generate long-term cash flows.

Mr. Callinan is an Executive Committee member of the Weatherbie Capital (an Alger Company) Advisory Board and the Friends of Harvard Football Board.

He is an equity owner in the firm and an Analyst for the emerging growth strategy.

Mr. Wong serves on the investment committee of the Asian Pacific Fund.

Mr. Wong graduated from Yale University (B.A. in Political Science and International Studies with distinction) and the University of California Berkeley, Haas School of Business (M.B.A., Investment Management Fellow). Mr. Wong holds the CFA designation and is a member of the CFA Society of San Francisco.

The Osterweis Emerging Opportunity Fund’s top 10 holdings may be viewed by clicking here.

Osterweis Capital Management is the adviser to the Osterweis Funds, which are distributed by Quasar Distributors, LLC. [38239]

Share "A New Paradigm for Stocks: Digital vs. Decline, Not Growth vs. Value " via:

Get our most recent outlooks and fund updates and receive invitations to our conference calls and webinars, right in your inbox.